More lights and a moment of darkness.

Yes, I do know it has been a while, and I do believe that I am now settling in with the new gig so therefore I may have developed some sort of routine that allows some more modelling.

Back to Victoria Street, the fleet is now in the process of undergoing an update, I have purchased some 3mm warm white LEDs for directional headlights, and now I am in the business of retro fitting them, also, while individual trams are on the workbench, interior lights and fibre optic marker lights are being installed where required.

So far X1 460 is now running the new LEDs and now has interior lighting, all controlled by the NCE Z14SR DCC decoder. 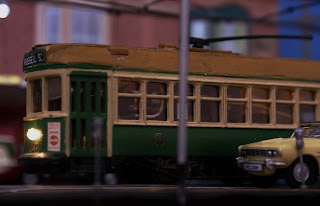 X1 460 at twilight.
SW6 870 has also recently undergone a refit, with headlights, saloon lights and the original (1970's) layout of marker lights (white, red, white) either side of the headlight. With the left over function of the decoder, one cab end can be lit up as if the desto box lid has been left open. This open desto lid provides better illumination for the trailing cab at night time, as the red marker lights don't seem bright enough for half cut drivers to realise that there maybe a tram ahead! As per prototype, the drivers cab bulkheads are painted white. This tram still runs the 'trusty and rusty' Bachmann 'pancake' mechanism. 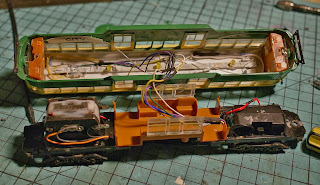 The magic (madness) inside﻿ 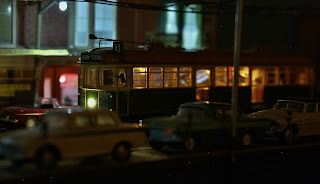 SW6 870 now in service with lights and the correct doors. 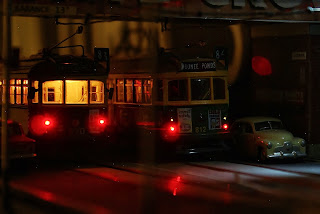 The trailing cabs at night, (870) with and (812) without the rear desto box lit.
Now for the dark side, the vintage laptop that I use for the JMRI decoder pro has decided to extinguish its backlight for the screen, thus throwing a decent sized spanner into the works, until I can get a second hand monitor, I will have to struggle along by attempting to shine a desk lamp off the screen and try to decipher the text like some demented Egyptologist reading hieroglyphs in a tomb. (there will be no chance of using the 'good' laptop in the study after sharing a 'fatal' beer with the last one, by order the minister of war and finance!)
So from under the wires and squinting at the screen,
Glenn
﻿
﻿
Posted by Glennofootscray at 21:44

Originally set up as a test track, like all layouts it evolved into some thing more, with a slight west suburban slant towards its location.

The modules are only 57cm long by 19cm deep, now there are seven modules, (railway station and racecourse, the original modules), another module is the undecorated fiddle yard ( now the Ammo Factory module), and the two later modules are (the railway gates and the bend, Epsom Rd), plus the latest instalments (The Junction and the Depot).

Victoria St can run as an end of line tramway, a heritage/regional (SEC) line, and a shuttle passenger service with short shunting at the station to service extra punters for the racecourse to a time table run to a 3:1 .
Enjoy, Glenn

Glennofootscray
Footscray, Victoria, Australia
A few years ago I decided to have a go at modeling trams, instead of trains for something different, this is what has happened....